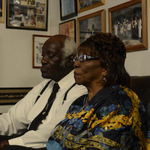 Rosa Murray and Joseph Murray are interviewed by Eric Crawford in October of 2013 in the Murrays' home in Beaufort as part of the Gullah: The Voice of an Island project. Rosa Murray was born on St. Helena Island, South Carolina, and Joseph Murray was born in Beaufort. Their marriage to one another is their second marriage, and they are leaders at their church. Most of the interview is with Joseph Murray, who also serves as a deacon, but the latter songs Rosa joins in with Joseph. The interview also provides a discussion of the history and procedures of the Watch Night service. Spirituals include "Stand Up," "I Wonder," "When You Come," "Kumbaya or Come by Here," "Send Em On Down, Lord," "Til We Meet Again," "Hold the Wind," "A Few More Days," "Watchman," "Aye Neva," "In His Hands," and "Guide Me."