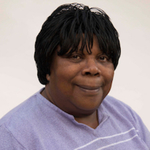 Minnie Gracie Gadson speaks to a group of faculty and students inside the recording studio of Coastal Carolina University as part of the orientation for the working group of Gullah: The Voice of an Island. The session is led by Matt White, professor of music. Gadson discusses her connection to the praise house and performs a number of songs, including some which were included on her solo portion of the resulting project: "I Promised de Lawd," "Adam in de Garden," "Were you There?," "No Rain Gonna Wet Me," "Oh de Blood," "By and By," "Sun Goin' Down," "Satan de Camp on Fire," "Have you been to the river," "Somewhere to Lay My Head," "Lay Down our Life," "I Saw the Light," "For My Lord," "Aye Bonnie," and "Ride dis Train."

Interview, Minnie Gracie Gadson, Saint Helena Island, Praise House, Childhood, Tradition, Bell, Ring The Bell, Devotion service, Were you there when they crucified my lord, Hymn, We'll understand it better by and by, I'll promise the lord that I'll hold out, shouting songs, Eric Crawford