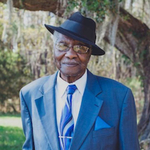 James Garfield Smalls was born on Saint Helena Island, South Carolina. He attended the Penn School and learned to conduct choirs and performed with B.H. Washington's community choir, The Hundred Voices. For a time, he was also a blues player. He served in the US Navy Seabees, serving in the US Pacific. Upon returning home, he served as a director for the senior choir at his home church, St. Joseph Baptist Church. Smalls also served as a leader for the Croft Praise House, which held joint services with Jenkins Praise House. The interview was conducted on the back of his truck on his farm with the cows that he managed lowing in the background. Smalls explains hymn lining, and the structure of a praise house service. When he sings, he often will switch between multiple parts in singing, giving his audience a sense of the harmonies of that particular song. In this session, he sings "I Heard the Voice" in long and short meter, "I'm Leaning on the Lord," "Too Late Sinner," "In that Great Getting Up Morning," "Old Sheep Done Know the Road," "Old Ship Maria," "Fisherman Peter," "Nobody Know," "I Know You Got to Run," "Roll, Jordan, Roll," "Ride on Jesus," "Everytime I Feel the Spirit," "Hold Up the Light," and "Drinking of the Wine."