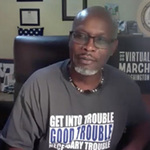 Marvin Neal is a former resident of Plantersville and a current resident of Georgetown, South Carolina. He attended Choppee High School, employee of Santee Cooper, a retired Army officer, graduate of Northwestern University and current president of the NAACP chapter of Georgetown. His parents were James Francis Neal and and Carrie Neal, and Neal is one of thirteen children. The Neal family attended St. Paul's AME Church, and Neal describes the services and the various locations of the congregation hall, as well as the circuit of churches that the preachers would preside over throughout the month. He describes the relations between communities in Plantersville and Sandy Island, and how Plantersville was unified by a series of bridges that replaced historic barges. Neal and his siblings attended Plantersville Elementary and Choppee High School, and he remembers the impact of discipline with teachers like Mrs. Flowers and Maclevly, as well as teachers at Choppee such as Miss Squires and Mr. Hayes, and how his mother was called in when they misbehaved. Neal joined the military, despite his father wanting him to either go to college or work with him in his concrete business. All twelve of his siblings also either went to officer's school or went to university at his father's insistence. His father dropped out of high school to make sure his sisters could finish their high school degrees. His mother owned Carrie's Restaurant near St. Paul's AME Church in Plantersville, which she owned after serving as the cafeteria manager of Choppee High School. Neal relates a story where his mother's long-lost brother came to eat. After his mother and her brother connected, he also discovered that there was significant overlap between his military service and his uncle's. His brother Richard, a retired Navy Lieutenant Commander, built his mother the restaurant after their father died at the age of 58. Famous people, such as Ted Turner, came through Plantersville just to eat at her restaurant, and her restaurant served as an economic driver for the area. Neal discusses the Geechee heritage, as well as the closeness of the Plantersville community.