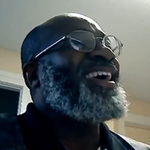 Abie Ladson is a native of Plantersville, South Carolina, but currently lives in Augusta where he owns Infrastructure Systems Management. He is a family and community historian of Plantersville, and he can trace his ancestry to multiple plantations in Plantersville. Since Ladson was a small child, he was interested in his family history. His great-grandaunt was Patty Anne Deas, who was the niece of John Bolts, the last Black man to serve at the South Carolina House of Representatives. Deas would tell Ladson and his family that Bolts was an intelligent man who taught in both Plantersville and Sandy Island. She mentioned that John Bolts' family member, Sam Bolts, saved up money to send John Bolts to Benedict College. She mentioned that most people from Old Mt. Carmel Church, as well as Plantersville, came from Sandy Island. They left Sandy Island during Reconstruction and formed Greater Mt. Carmel and Old Mt. Carmel Baptist Church. His great-grandfather, Gabriel Deas, worked from 12 to 15 years old to buy his parents five acres of land for his parents to move them off of Hasty Point Plantation, then purchased an additional five acres when he was 21, where his great aunt Eliza still lives today. Some properties were acquired by freedman through the production of rice, and he also mentions Dunbar Plantation, which was purchased by seven or eight freedmen. He later traces the Ladson name and family line back to the 1700s and Barbados, and then discusses the bush doctors who would help provide healing tinctures. He also discusses folk traditions, such as ways to repel hags from your house. He describes congregations catching the spirit during church services, and how they raised songs. His great aunt's was "I'm Gonna Serve the Lord 'Til I Die." Ladson attended Plantersville Elementary, and he describes the disciplinary measures of those teachers and the collaboration between teachers and parents as well as the fact that the bus drivers were students. Ladson's father served in the armed forces, then decided that he was going back to school and got his master's degree from University of South Carolina, then worked for multiple planning departments, including the Myrtle Beach Airport. His mother was a schoolteacher at Choppee High School.