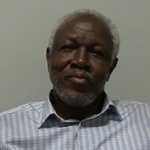 Interview with Louis Morant at his law firm in Georgetown, South Carolina. Morant's parents were David and Helen Morant. Neither his parents had a high degree of education, but both provided for the family. Helen had her own beauty salon, alongside working domestically. Morant has seven siblings; his eldest brother served in the Vietnam War, he opened a law practice with the second-eldest brother Johnny, and three sisters live and work in Connecticut at United Technologies, and two others are retired schoolteachers or public servants. His family all attended Mt. Carmel Missionary Baptist Church, and he describes how Greater Mt. Carmel and Old Mt. Carmel first split congregations, then came together to form a unified church. He also recalls that the Hasty Point owner deeded property for the land on Mt. Carmel. When his father fell ill, his family would make provisions or take turns taking care of him. His great-grandfather Jack Mayrant (pronounced Morant) owned a great deal of land in the area of Jackson Village, and Morant believes that Jackson village is named after Jack Morant. Morant discusses the discipline at Plantersville Elementary, and the connectedness between parents and teachers, particularly Miss Bonnie. He would spend summers with his older sisters in Connecticut and work retail jobs, when he realized he spoke with a Gullah accent, but his time at Savannah State College, he encountered students from Charleston or the Georgia Sea Islands who his classmates would call "Geechee." He recalls the prevalence of growing up with grits and rice, as well as getting produce from neighbors for whom they would help do farm work. After he had become a lawyer, he helped enforce desegregation by closing Pleasant Hill, a neighboring mostly white high school that would only admit Black students to play sports. He discusses this case in detail. Morant was also heavily involved in building the Plantersville Community Center through levying funds, two dollars, from each household in Plantersville. He discusses how the church leadership ensured cooperation across the community through programming and joint Sunday services and baptisms, as well as Watchnight Services. He describes the rivalry between the community members who would frequent juke joints or clubs like Up Jump the Devil and the churches, though he does describe the various singing groups throughout the community, including the Chosen Sisters. He remembers one uncle who was buried at a plantation, but otherwise, they weren't talked about other than as employment opportunities. He hopes for more economic opportunities to come to Plantersville.