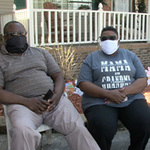 Interview with the Dekine Family, Tom Dekine, Vanetta Dekine, Marlanda Dekine and DeAndre Tucker. Tom Dekine's mother was a Milton and Heyward, and he explains the migration of the Heywards and Dekines. Tom's father ran away from home after his father died, and walked his way to Columbia, South Carolina. He returned to Plantersville to take care of his grandfather, who gave him his land. Tom has five brothers and five sisters, and he grew up in Plantersville with his surviving brothers and sisters. Tom's family farmed a little on the land inherited from his great-grandfather, growing okra, peanuts, tomatoes, and cucumbers, as well as raising hogs and chickens. He describes that only descendants of individuals who worked plantations or their friends could access the water to go fishing on former plantation property. Vanetta's maiden name was Ford, and she grew up on Exodus Drive in Plantersville. Her mother's maiden name was Grice. Vanetta's father was Reverend Frank Ford, Jr, who presided over a church in Hemingway, and worked at the Paper Mill. Her grandfather, George Ford, brought water to the Plantersville community. She remembers before the roads were paved that some individuals would get killed for being on property where they weren't supposed to be. She didn't know her mother's side of the family. Her experiences growing up in the church and her father made her decide not to raise her children in the same church as her family. She does not recall her experience at Choppee High School fondly, despite being an accomplished student. She talks about going to college and realizing that she used a lot of "Gullah slang," which distinguished her as from Plantersville. Vanetta discusses the sense of safety that she feels, and then she and Tom discuss how the villages became named slowly in the way they are now. This interview was conducted at the Dekine Family home and inside by Zenobia Harper.