The current issue of the Journal of Political Science inaugurates a new format for our publication. Beginning with this issue and in the future the Journal will feature collections of scholarly articles on particular themes. This issue will emphasize "Terrorism." In the spring of 1987 we hope to produce our second special issue on the Bi-Centennial of the United States Constitution.

Most of the original articles in this issue were presented at professional meetings. Several of them are revisions of earlier drafts. While most of the authors are political scientists the disciplines of history and speech are also represented. The essays are not restricted by the format to the more dramatic aspects of terrorism. Rather, the focus has been upon an understanding of both the motivations and the various dimensions of terrorism. Obviously, this area of research is still in its beginnings with an array of new analysts making their appearance to supplement some of the old specialists. We can only be confident that terrorism is as complicated a phenomenon as it is a frightening one.

For example, Norman Provizer introduces the essays that follow with a useful review of the literature. He notes that better than 99 percent of the general works on terrorism have been published since 1968. Professor Provizer also notes the difficulty scholars encounter in defining both terrorism and what a terrorist is. This is a theme re-echoed in a later article by Richard Leeman.

Following Professor Provizer's remarks the remaining seven essays are divided into two parts. Part I includes four articles that examine the ingredients of theories of terrorism. Robert Maranto in "The Rational Terrorist" offers and explains the intriguing thesis that terrorism can be treated as a form of politics. Further, as in most forms of politics, there are also moderates and radicals. Professor Maranto writes in the context of international conflict and security. In a sense, then, Joseph Goldman takes up where Professor Maranto leaves off. In "Terrorism and the Role of Security Strategies" Professor Goldman examines and explains several types of terrorism and curricula of terrorist studies that have entered the curricula at war colleges and service schools in the United States. Because of and in part as the result of the fact that American military personnel, civilians, and installations are targets of terrorism and require a response security studies have taken on crucial importance.

Terrorists and their activities are often inspired by a demanding moral code. Gregory Rose identifies and analyzes the Islamic revolution in Iran (August, 1978-February, 1979) and its immediate aftermath as an example of the cultural environment that inspired and guided the event. Professor Rose argues persuasively that much of a society's political impetus flows from its overall culture questioning the more prevalent and singular economic casualty theories. Iranian society, for instance, was prepared by its predominantly peasant culture to become a theocracy. The theocratic leadership has gone on to justify or applaud (and perhaps coordinate) anti-western and sometimes violent acts that many victim governments have designated to be "state terrorist."

A frequently overlooked but relevant aspect of terrorism is the rhetoric that surrounds and often accompanies it. In a sense Professor Rose's essay discusses the peculiarities of a background which Richard Leeman refers to as "holy terrorism." In "Terrorism as Rhetoric: An Argument of Values," Professor Leeman maintains the disconcerting notion that even secular or atheistic terrorists possess a "holy" (and certainly a holier than thou) attachment to their cause which regards its enemy and intended victim as unclean. Terrorist violence affirms terrorist values (and of course their purity) even as it attacks the violence of the corrupt and artificial society for which it has only contempt.

In Part II, three case studies concretize our treatment. Leonard Weinberg and William Eubank, in "Change and Continuity in the Recruitment of Italian Political Terrorists, 1970-1984," using a time-line, evaluate the sorts of people and the circumstances in which they are attracted to and become full members of terrorist organizations. If there is a terrorist personality it is not one that can easily be simplified. Different sorts of people tend to join terrorist movements at different times and for different reasons. Indeed, a number of terrorists, at least in Italy, were known to have first tried to work their political goals through existing and legitimate channels, failed in the process, and turned to a violent and desperate alternative. This case study substitutes "frustration theory" as a particular explanatory motivation.

Michael Gunter's essay is on the possibility of reaction to terror. In particular, Turkey's policy toward Armenians living in Turkey is carefully dissected. Can or should a government engage in counterterror is also a question often posed but rarely (and certainly not completely) answered. Counterterrorism may even be more difficult to define that terrorism itself. The question may revolve around whether discrimination against an ethnic or religious minority on the part of its government or that majority is any worse in Turkey than elsewhere. Professor Gunter, though, raises a crucial point for the democracies: if they are the targets of terrorism that is the outcome of internal dissent their governments should consider the plight of disaffected minorities.

Finally, Edward P. Moxon-Browne makes a similar point as he links culture to social discontent and political polarization. Violent acts are often the result of a complete breakdown of confidence in political and judicial institutions. Professor Moxon-Browne documents both important and demographic changes in Northern Ireland (that may lead eventually to a Catholic majority). The data that Professor Moxon-Browne present are excellent (if somewhat depressing) indicators of the collapse of a political process as a growing and completely disenchanted minority sees the state as merely an agent of discrimination and exploitation by an insensitive and bigoted majority.

In retrospect, these articles cannot offer a complete picture or comprehensive analysis of terrorism. They do, however, present a sense of understanding of an ancient phenomenon only recently re-discovered by scholarly observers. It is still too soon to suggest a theory of terrorism. It is never too early to discourage its brutal results. The contributors to this issue have assisted in this effort by addressing the multi-faceted reality of their subject.

Introduction: Terrorism and the Terrors of Definition
Norman W. Provizer

Terrorism and the Role of Security Strategies
Joseph R. Goldman

The Rational Terrorist: Toward a New Theory of Terrorism
Robert Maranto

Terrorism as Rhetoric: An Argument of Values
Richard Leeman

Cycles of Terrorism: A Question of Contemporary Counterterror and Harrassment Against the Armenians
Michael Gunter

Alienation: The Case of the Catholics in Northern Ireland
Edward P. Moxon-Browne 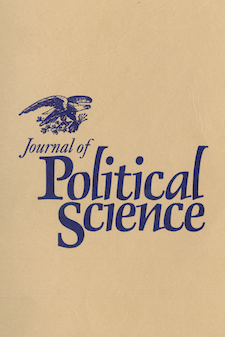 Journal of Political Science did not publish a Volume 13.