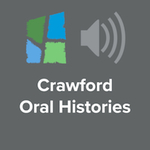 Interview with Minnie Gracie Gadson, which picks up in mid-conversation between Eric Crawford, a researcher studying Gullah spirituals. The interview is a dialogue between the two, Crawford often prompting Gadson for the next song. They discuss Violet Alston and James Garfield Smalls. This is a continuation of the previous interview with Gracie Gadson, a song leader on St. Helena Island, which begins in the midst of "Drinking of the Wine," and then proceeds with "Take Me to the Water." Gadson talks through the different songs for different occasions. She discusses that some individuals have certain songs that belong to them, and why certain songs belong to certain individuals. She discusses her time performing songs at festivals and then she moves through some additional spirituals. The recording cuts off in the middle of Gadson performing "I Saw the Light."