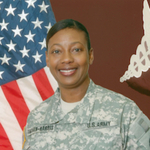 Yvonne Tucker Harris was born and raised on Sandy Island, experiencing several of the huge cultural shifts in the community that took place in the late 20th century; including the closing of the School, the bringing of electricity and telephone service to the island, and the reintegration of Georgetown area schools after the era of Jim Crow segregation. Her parents were Hattie Tucker and Alfred Davis, but she was raised by her grandparents, Minrus and Louise Tucker. Both of her grandparents were pillars of the community, serving both as active community members and strong moral centers to Yvonne and the other children they raised alongside her. This communal family life imparted her with a strong sense of filial piety, a healthy respect for her grandparents, uncles, and aunts, but also the community leaders of the island's past. She is a veteran who served in the US Air Force and comes from a long line of soldiers, serving in the military since the Civil War. In this interview from 2016, Dr. Eric Crawford, Coastal Carolina University faculty researcher, interviews Yvonne Lovinia Tucker Harris. In the interview, she recalls these events and, with occasional interjections from her mother, covers a wide array of subjects from her life on the island. She begins by discussing her family life, explaining that she was raised by her grandparents alongside many of her other, younger family members. They looked towards their elders as role models and moral leaders, both serving to educate in matters of self-discipline, duty to one's community, and spiritual growth. She also talks about her relation to the island's only extant church, New Bethel Baptist Church, and what she knows about the now-defunct Methodist church, Butler Chapel. Butler Chapel was demolished in the 1960s, so records of how its services were done and how its practices differed from the Baptist doctrine practiced by most of the island. This segues into how she and her friends were largely unable to leave the island for much of their childhood and, because of this, had to learn to appreciate the natural resources on the island. Her experiences on and off of the island are a major point of identification for Yvonne, as much of her interview is about how and why she eventually decided to leave the island and join the Air Force as an adult. The act of leaving the island was something that she holds as being important, and that access to the island would be key to bringing back those that left the island in the first place. The interview ends with Harris' fears for the future of the island and that, in a hundred years, the only thing left of her home would be the cemeteries that they leave behind. She doesn't regret that she left the island years ago, but that the recent activism to help the island and its people should have begun long ago.