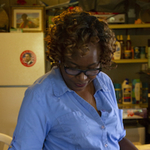 In this 2015 interview, Dr. Eric Crawford, Coastal Carolina University faculty researcher, and a student (Quentin Ameris) interview the owner and proprietor of the Pyatt General Store on Sandy Island, Mrs. Beulah Pyatt. They discuss that, even though she was not born and raised on the island, it quickly became her home. She talks about how she first moved onto the island, her interactions with the locals and how they invited her into the fold. She also confesses that, in the early years, she felt almost like she was trapped. She didn't have a boat of her own and, because everyone else worked during the day, she was essentially left alone with her newborn child for long swathes of time. She connected with the local community quickly, though, and through this she became tied into New Bethel Baptist Church, a local landmark. She discusses the importance of song in worship and as an expression of spirituality, including the usage of "Shouting" and "Stomping". Ultimately, this is tied into her family and their involvement on the island. Finally, they move to the creation of the Pyatt General Store and its role in her family. She established the business in the late eighties, working when she wanted and becoming her own boss. It serves not only her local community, but as a gift shop for visitors to the island. This interview was conducted at the Pyatt General Store on Sandy Island, South Carolina. This oral history was developed as part of a student-driven project on Sandy Island by The Athenaeum Press at Coastal Carolina University in 2015, resulting in the publication At Low Tide: Voices of Sandy Island (2017). Its digitization is made possible by the National Historic Publications & Records Commission at the National Archives.