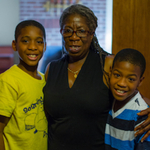 Rosalyn Geathers is a resident of Georgetown, whose family was involved in the tragic boating accident in 2009. In 2009, Rosalyn Geathers' grandson Ziar along with his mom Kita, and Kita's mother were crossing the Waccamaw River when their boat capsized. Ziar was the only one who survived. Ziar was saved by Charles Pyatt, who spotted his diaper floating in the river, and scooped up the infant. Ziar came out of the incident with some problems that affected his learning and talking but that is better than losing a life. Rosalyn describes Ziar as her "little angel" along with his brother Josiah, who was attacked by a dog while unsupervised by his parent, which resulted in Rosalyn taking him in. The kids are doing well, both in school and strongly active in church. Rosalyn still loves Sandy Island and the people on the island regardless of the events that occurred. She views the events as just a part of life and will not change anything she does or feel negative about Sandy Island. She is interviewed by Coastal Carolina University student Quentin Ameris and faculty researcher Eric Crawford.