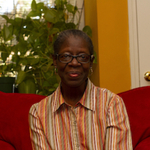 Interview with Martha Cousey at her residence in Conway, South Carolina. Cousey's parents, Helen Herriot Lance and George Lance, grew up in the Georgia Hill community of Sandy Island. Although Cousey grew up principally in Conway she did spend her time on Sandy Island. This interview covers much of the same information of her March audio interview. She discusses the employment of her parents, and that she would return to Sandy Island during the summers to stay with her extended family, especially her aunt Isabella Lance. Her husband was Gabriel Lance. She describes the using the mortar and pestle to remove the husk from the rice grains. She describes the chores that she and other children would do to help at the house, which she describes as fun. She describes the way to Sandy Island via paddled boat from the Brookgreen Gardens landing. She remembers the garden that would be on the island, but she also remembers that at Whittemore school would teach you how to speak proper English. Cousey owns property on Sandy Island, and she has politely refused all attempts to purchase the property. She remarks that Sandy Island has a rich heritage, and she remarks that Sandy Island has always been a family.